A party of Fuellers had the privilege of visiting the City of London Police Force. The day began with a series of interesting presentations covering the full spectrum of their local, national and global work. They operate as a national centre of expertise for fraud and cyber reporting where investigations can include cybercrime, money laundering, pension or insurance fraud, be it for large corporations or private individuals. 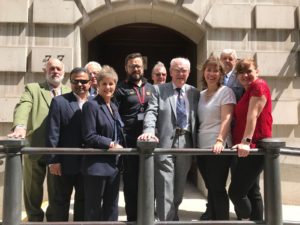 The City of London Police Force are responsible for law enforcement within the square mile and share resources with both the Metropolitan Police, who cover overall Greater London and the British Transport Police. Examples of their joint teamwork were seen at incidents such as the devastating Grenfell Tower fire and the Westminster and London Bridge terrorist attacks in 2017.

They impressed on us the importance of working in close association with all City businesses, retailers, residents, the general public and tourists, asking us to be vigilant and report any suspicious activity whether it is on the streets or on the internet. Highly visible police officers are operating around the City at any time of day or night not only to keep us safe but aimed at detecting and disrupting any questionable activity. This could include drug or terrorist related crimes. Police vehicles also patrol the City streets together with mental health nurses monitoring and supporting the homeless and vulnerable. Regrettably the City and the Thames have one of the highest rate of suicide attempts due to the abundance of skyscrapers and bridges in the area.

After these fascinating presentations, we were granted special access and shown around the operations room handling emergency communications and monitoring traffic and incident cameras. We were also privileged to watch demonstrations by the handlers with trained dogs for detecting drugs, currency and explosives. A road collision officer explained methods for collating information at the scene of an accident to record details assessing who was at fault; we were also shown the personal equipment worn and carried by the firearms team. We finished the tour with a visit to the mounted police unit and their magnificent trained horses, who are used not only to deter crime but are used to help control demonstrations and processions. 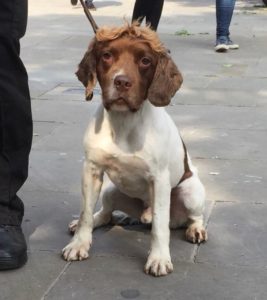 We completed our day with a brief visit to the Police Museum at Guildhall.

A superb day and we lucky Fuellers would like to thank the City of London Police for all their skill, dedication, enthusiasm and valuable time given to us on the day.