A party of 14 Fuellers visited one of the hottest places in the Solar System in June, when they joined the Culham Centre for Fusion Energy to see how nuclear fusion, the power source of the Sun, could change the world.  Fusion is hard to achieve and will need a lot more work to be able to sustain power generation reliably, so a modest but realistic ambition is for 20% of world electricity to come from fusion by 2100.

The usual design of Torus type fusion reactors was explained first.  The world’s largest so far was actually running a pulse (doing a few seconds of fusion, taking 575 MW from the National Grid to do so) at Culham the evening we were there.  The next such reactor, an even bigger one, is under construction at Cadarache, France, to perform experiments from 2025.  These reactors, neither of which are designed to generate electricity, are both internationally-funded.  That means there’s a political requirement for key components to come from various contributing nations; and debates/care taken over ownership of any resulting patents or discoveries that come out of the research.

Of particular interest to Fuellers was the newly-constructed experimental fusion reactor due to start experiments next year, MAST (mega-amp spherical tokamak) Upgrade.  This will use a different approach to the other reactors, and its 5 year, £45m construction was almost entirely UK-funded, so we can source components as we choose, and any patents or the right to exploit inventions that result, can stay with the UK.  In just a few more months' time, temperatures of 50 million degrees C will be created inside MAST – over three times hotter than the Sun.  MAST is attracting a lot of interest this year, and our visit was preceded by Prince William and Philip Hammond. 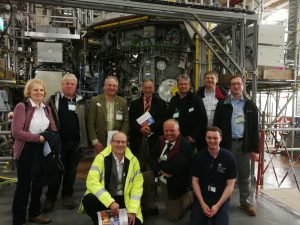