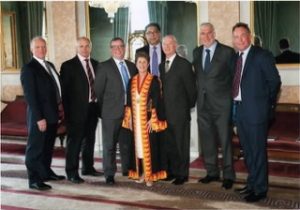 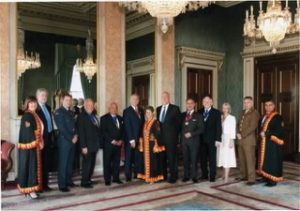 At 10 o’clock on a bright Wednesday morning in April, Court members of the Fuellers were summoned to gather at the Fishmonger’s Hall for the Election Court meeting, followed by lunch. From the perspective of someone enrolled as a liveryman almost 20 years ago, the contrast was remarkable, and a stark indication of the direction of travel of our ancient Company. Back then, the term “ancient” was not just a noun, it was also an adjective and the complexion of the Court was certainly male. The “fuel” focused Company was in decline with the demise of “King Coal” determining its trajectory.

Immense credit goes to the Masters and their Court assistants over the intervening years, not just for turning around the traditional company but for redefining its role in the 21st-century and providing a valid and compelling raison d’etre. The energy focus of our modern Company provides an exciting mission for our growing membership and an attractive option for prospective players in this global arena. With the Fuellers Ezra Memorial Lecture, Conversations and many other outreach projects the Fuellers reflects a vibrant presence.

The purpose of the Election Court is to process the succession of power and this moment provided an excellent snapshot of the Company with our 1st lady Master, Jan Harrison, Senior Warden and newly elected, Master-elect, Chloe Andrew-Jones, Junior Warden and newly elected, Senior Warden-elect, Shravan J Joshi being joined by Junior Warden-elect Professor Averil Macdonald OBE. With a growing diverse members list and reducing age profile. The Master, announced at the lunch, the news that His Royal Highness, Prince Edward, Earl of Wessex KG GCVO has accepted, in principal, our invitation upon election, to become Master in 2019 – 2020.

In this grand setting, adjacent to London Bridge overlooking the Thames, the Master officiated over the enrolment of 5 new Freemen, Leslie Abbie, Julian Boddy, Ronald Lansdell, Shiv Nair and Gavin Towers and 2 liverymen, Daniel Reed and Jack Simmons; who couldn’t fail to have been impressed by the vista before them. The relaxed formality and warm 21st-century reception, in such imposing traditional surroundings against the backdrop of river traffic and the city’s urban high-rise skyline. The welcome carried over into the banqueting Hall where following an excellent lunch the new arrivals were personally acknowledged and our guest speaker Mr Malcolm Brinded CBE FREng FEI provided reflections on his career with Royal Dutch Shell and encouraging comments regarding the Energy Institute of which he is President-elect.

With the mellow contentment of a fine lunch with convivial colleagues and the satisfaction of knowing that our livery company is blossoming, your reporter set-off for his return trip to the garden city of Liverpool. The UK West Coast rail terminal was closed due to a trackside fire down the line and late into the evening yours truly arrived on the wrong side of the Pennines. The escargots-esk journey did however, provide space to contemplate the contrasting fortunes of the Fuellers and our dysfunctional national rail system. After all we were both once dependent on old King Coal!