Mercers hall on a fine sunny morning, the grand setting for our annual Election Court and lunch. The April Court meeting is where the election of officers takes place for the ensuing year, on this occasion electing His Royal Highness The Earl of Wessex as Master, Professor Averil MacDonald OBE as Deputy Master, Mrs Carrie Marsh as Senior Warden and Mr Michael Shirley as Junior Warden with effect from the Installation Court on 16 October.  The Fuellers Company were out in force to welcome the Master Elect who was greeted by our Clerk, and introduced to the new incoming Freemen Damir Ahmovic, Catheryne-Ayne Hunte, James Mattinson, John Pitts, Mona Taybi and Liveryman Simon Brewster. Having spent some convivial time chatting to our new members, Wardens and Master, it was time to proceed to the formal Ceremonial.

The Master Elect processed into the Ceremonial Court in the art gallery style Ambulatory with Master Shravan Joshi, the Wardens, new Freemen and Liverymen. Everyone present looked resplendent in their finery, the occasion only momentarily interrupted by hilarity as a perfectly timed workman’s drill sounded a fanfare at the exact moment Court were bent, poised to take their seats. Peace restored, it was time for the Wardens to present Past Master’s Consort, Peter Nelson, to receive the Freedom of the Company by Presentation in recognition of his service as Consort to IPM Chloe Andrews-Jones. Then on to admit the new Freemen and enrobe our new Liverymen before concluding with some welcoming words from the Master. Ceremonial complete, the Court retired, and it was time to welcome our guests as they arrived for lunch.

Guests were welcomed through a receiving line into the drinks reception in the grand hallway of Mercers Hall. High ceilings and long drapes added to the grandeur as we welcomed Principle Guest The Right Honourable The Lord Mayor of London alongside visiting Masters and our other guests. The Earl and all present mingled freely and there was a buzz about the room.

It was soon time to process into lunch which was hosted in the Livery Hall with its magnificent stained-glass windows. The food was wonderful and service faultless. A fine choice by our Master, Shravan Joshi who presided over lunch at the top table with his guests and Consort Mira, who looked radiant. The guests, having been introduced by Senior Warden Averil MacDonald, listened with interest as the Lord Mayor updated the company on civic matters before our Master rose to speak.

The Master then invited forward Dennis Woods, president of the Oil Industries Club to sign the new Memorandum of Understanding between themselves and our Company. This being an agreement to bring the two parties closer together, fine recognition of the Fuellers Company which has grown from humble beginnings to now being ‘The Energy Voice of the City’.

The Earl of Wessex then rose to present the new HRH Earl of Wessex Award for Meritorious Service. The inaugural recipient of the award was Mr Roger Cloke. Roger has been a stalwart member of, and servant to, the Fuellers Company for over 30 years. From Freeman then Liveryman to Court Member Roger gave many years of service in the position of Membership Assistant which concluded in January 2019. Overseeing the processes by which applicants join the Company and guided through to admittance, Roger has also been on hand to welcome family and friends of those being admitted and to put the new applicants at ease. This diligent and consistent service was further recognised by a standing ovation as Roger received the award. 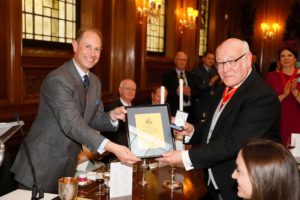 The proceedings concluded, the Fuellers and their guests retired to share a stirrup cup and reflect on a truly splendid day.