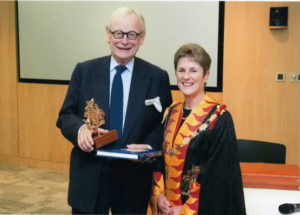 Fossil Fuels and the Energy Mix

The Worshipful Company of Fuellers

On the 20th of September, the Fuellers and their guests gathered at the offices of Cameron McKenna Nabarro and Olswang LLP for the 13th Annual Lord Ezra Lecture instituted by Lord Ezra, MBE, founding member of the Fuellers Company and sponsor of the annual lecture held annually since 2004.

This Annual Lecture, now instituted in the Fuellers calendar as The Lord Ezra Memorial Lecture is a tribute to the intellectual leadership of Lord Ezra, who sadly passed away in December 2015. The lecture has developed a tradition to invite high calibre public intellectuals and leaders to expound their ideas on the energy industry- we were delighted to have Lord Deben as our principal guest speaker.

The Right Honourable Lord Deben (John Selwyn Gummer) is currently the Chair of the UK Committee on Climate Change (the CCC), which is an independent, statutory body established under the Climate Change Act of 2008. Its purpose is to advise UK Government and Devolved Administrations on emissions targets and report to Parliament on progress made in reducing greenhouse gas emissions and prepare for climate change. Additionally, Lord Deben is the founder and now, Chairman of Sancroft International, a Corporate Responsibility consultancy, working with blue chip companies around the world on environmental, social and ethical issues.

Lord Deben has held ministerial positions in Government for 16 years with responsibility for several portfolios including Secretary of Agriculture, Fisheries and Food, Minister for London, Employment Minister and Paymaster General in Her Majesty's Treasury and has been Britain's longest serving Secretary of State for the Environment in the UK from 1993-1997. It is this experience of policy making that he has brought to bear as the Chair of CCC- a unique organisation of its kind in the world, whose role, and importance to the Fuellers, was explained by Lord Deben in his address.

Our Master, Janet Harrison while introducing Lord Deben highlighted that Lord Deben had consistently championed an identity between environmental concerns and business interests, which in addition to his policy advisory role to the Government, as CCC Chair, made him uniquely qualified to propound his views on the title of the lecture- 'Fossil Fuels and The Energy Mix', an issue close to the hearts of all Fuellers.

Dame Fiona Woolf, Hon Liveryman and former Lord Mayor of London added her welcome to the principal speaker and the guests and thanked Cameron McKenna Nabarro and Olswang LLP for kindly hosting the Fuellers for the evening and handed over to Past Master Paul Cuttill, OBE and Chair of the Industry group of the Fuellers who was the master of ceremonies for the evening.

Lord Deben opened his remarks with a phrase 'unusual circumstances of certainty' explaining the current national energy context and the often contradicting views on climate change. He made the three following points to substantiate his assertion:

Lord Deben further went on to explain the unique role of the CCC and in the UK Climate Change Act 2008: Not only does the Act provide the direction and speed on the energy transition but also provides budgets and targets on carbon emissions that have to be achieved under law; unlike any other legislation the parliament does not have the power to amend/change these targets unless the approval of the CCC has been sought. No other part of government has this level of certainty laid down in advance!  Furthermore, he added, that the Act lays down the requirement for the CCC to provide annual updates through published reports on progress achieved. Britain, thanks to this unique creation of the CCC and its role in providing policy certainty has become an example worth emulating following the global climate agreement signed at the CoP22 in Paris in December 2016.

The world, he asserted to a gasp from the audience, now agreed with the UK that unabated coal had no real future in the generation mix in 2040- that was another 'certainty' too.

Turning to the global agreement on climate change and the geopolitics of energy and climate negotiations, Lord Deben, suggesting that it was a fact universally acknowledged that global warming ought to be curtailed and that it was now technologically possible to do so, gently let it be known to an amused audience that it wasn't too much of a surprise for him that of all but the 3 countries globally that refused to sign the Paris Accord, two were the US and North Korea!

Commenting on the future of fossil fuels in the UK for the period up to 2050, Lord Deben mentioned that the central part of the policy is to move to lower carbon emissions for the energy sector to a point of 'no carbon emissions'. While the coal industry, as we now of today, will have no place in this future, even the gas business beyond 2040 would have to give way to a completely new set of technologies with new economics. He asserted several times in his address that this would be impossible to achieve without Carbon Capture & Storage (CCS) and that the policy was agnostic towards the input fuel source for CCS- 'policy does not care if its coal CCS or gas CCS that s developed going forward' suggesting that it was not yet 'all doom and gloom' for the UK coal sector.

He explained his belief in this transition due to the three key global trends which he said were now proven established facts:

Following this 'myth busting' Lord Deben turned to other contentious issues that have been debated amongst the Fuellers. Many would recall the previous Ezra Annual lectures especially those given the last year by Steve Holliday, CEO National Grid and especially the one previously on CCS, by Past Master Richard Budge who was one of the earliest proponents of CCS projects in the UK.

Speaking on the big implications beyond 2050, Lord Deben highlighted some of the biggest uncertainties as of now- chiefly 'whether we can get CCS technology delivered in the UK', what a 'sensible role for natural gas' might look like and whether we as a nation believed Shale gas to be a 'replacement or addition' to our gas requirement; big unanswered questions indeed.

He then proceeded to give his own perspectives on these big issues, saying he believed that:

What followed this scintillating address was a lively question and answer conducted and moderated by Past Master Paul Cuttill.

The questions, like the address, too came thick and fast and like the speaker the members of the audience too did not hold back.

As this Q&A was conducted under 'Chatham House Rules' not possible to report this in extensive detail. Suffice to say that the range of questions covered the gamut of issues on UK Policy on CCS, Shale gas and Nuclear, the role of energy efficiency, building standards, international climate negotiations to the role of new technologies such as Artificial Fertilisers, Energy Storage, Hydrogen as an energy vector to the good old evergreen issue of the role of the government in energy markets.

Lord Deben, with facts and figures to his command answered these with felicity and his usual elan.

Dame Fiona Woolf made a short and brief response to the speaker, she picked up one point on AI that Lord Deben made and wondered whether these 'smart plant dispatch algorithms would stand up to the vagaries of policy and government intervention that could and should never be ruled out of energy markets!' She then thanked Past Master Paul Cuttill and the hosts for the evening.

The Master Janet Harrison then proposed the vote of thanks with a presentation of memento to Lord Deben. A convivial drinks reception kindly hosted by Cameron McKenna Nabarro and Olswang LLP followed.

Given the level of debate that the lecture generated, an unscientific poll about the lecture was carried out by the author of this report -who shall remain anonymous â€“ during the course of the reception that followed. It would not be too wide off the mark to summarise the lecture as a 'scintillating performance delivered with elan, often bordering on chutzpah'.

The evening continued with conversations flowing as freely as the fine wine- a wonderful evening was enjoyed by all.