Cometh the hour, cometh the pan! (Groan). There was a friendly rivalry in the air as many Livery Companies convened for the 15th Inter Livery Shrove Tuesday Pancake Race, organised by the Worshipful Company of Pouters'.  Indeed it was a combined effort with the Gunmakers Company providing the starting cannon, timekeeper from the Clockmakers Company, Glovemakers providing gloves, Poulters providing chefs hats and aprons and lemons provided by the Fruiterers Company. The course was marked out, a crowd had formed to watch. Now was the time for all that training (e-hem...) to pay off... 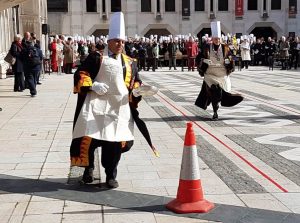 The Fuellers cheered on Master Carmen in the Masters Qualifying Races which set the pace for the next hour or so. Closely followed by our own Shravan Joshi in the Masters Race. Shravan finished victorious in his heat but was pipped to the finals by a few Masters who were fleeter on foot. The Master's pre-race strategy of anchoring the Master's chain under the apron and tying the apron around the outside of the robe to minimise 'flappage' was clearly a winning combination. 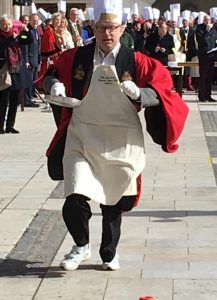 Next to run in the Liveryman heat was the organiser of our team, Liveryman Paul Mott. Paul has had many years experience of this Inter Livery Race and came prepared with tape, scissors and all sorts of other handy items to ensure hats did not float off, costing extra precious seconds through penalties. Had it not been for a miscommunication with the stewards which saw the starter pistol fired while Paul was still trying to get his gloves on, I dare say we would have had another winner! As it was, Paul romped home in a very respectable time and stayed upright, unlike a couple of other entrants who were quickly back on their feet.

Then it was time for the Ladies Heat. Enter Elena Oderstone, no stranger to this race, had been warming up in the background and was ready to take on the competition. This was a fast race and Elena was victorious in her heat. The Ladies finals were soon upon us and once again it was a close finish with only two-tenths of a second between each runners time. Unfortunately there was no photo finish facility available on the day.

Before we knew, it was time for a brief breather as the Novelty entrants, including that of your Junior Warden, took to the square to parade their attire. Many had gone for costumes to represent their Livery, some also representing the Lord Mayors Charity. Our costume was based on the Green Samaritans telephone, with acknowledgment to 'Place 2 Be' and 'On Side' charities through hand created fabric replicas of their logos. There was also our Company name on the headgear and crest in the centre of the phone, a few hours sewing! The winners of the Novelty Costume were then read in reverse order and when the 2nd place went to a very worthy 'Cogsworth', at which point we feared all was lost. Then a victorious (if not a surprise to the said entrant) announcement that the Fuellers took first place! A swift photo opportunity with Sheriff Liz Green and the Lady Mayoress before it was back to the race. We were not in danger of breaking any land speed records in this category, but we could hold our heads high having already triumphed.

The morning concluded with a buffet lunch in the Crypt and prize giving where we were presented with the silver salver for best Novelty Costumes, which we can proudly display for the year ahead. 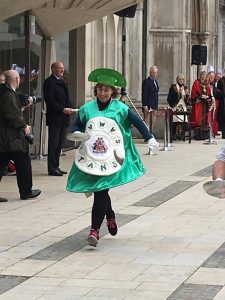 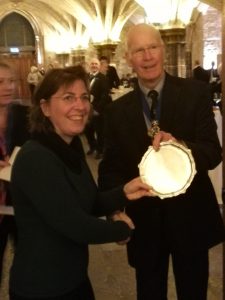 So all in all, a great result all round. We also enjoyed support on the day from Catheryne, our reservist, who will be racing in the Novelty Category in 2020, The Father of the Company, Past Master Michael Bryer Ash as well as Liveryman Bert Marsh and a surprise visit from IPM Chloe Andrews-Jones.