A sparkling early May evening greeted Fuellers and their Guests as they arrived in the Vista Suite at EY's HQ near London Bridge, the occasion being was the 20th Fuellers Conversation in association with EY. The Guest Speaker was Liveryman Fueller Mark Crowther, Technical Director of Kiwa and his theme - ‘From Methane to hydrogen: the road map to realise hydrogen’s potential’.

After a scene setting introduction from EY’s Tim Calver, Over 50 Fuellers and guests heard Mark set out what is a long term and complex issue – the contribution that hydrogen could make to the decarbonisation of energy supplies to a factor of 80% by 2050 or indeed the new Net Zero target suggested by the Committee for Climate Change. Whilst the decarbonising of power production and supply has made progress that associated with heating and transport remains to be addressed fully.

It is clear that the world still requires an energy vector that provides reliable, modestly priced energy supplies to move energy from the point of production/capture and transfer to customers when required. Hydrogen can be the new methane as whilst it has a lower calorific value (CV), its Wobbe Number (Wobbe is an indicator of the interchangeability of fuel gases and reflects CV to relative density) is similar to methane and provides for similar flow characteristics which is key for the repurposing of the existing low-pressure gas grid. 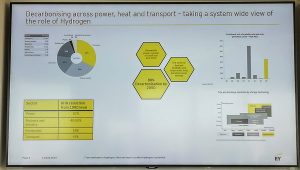 Assuming this repurposing can be achieved, then the concept of hydrogen as the new methane is to provide a similar but critically zero carbon energy supplies material for current users of natural gas in industrial, commercial and domestic settings. At the same time it can serve the transportation sector via dispensing pumps on filling station forecourts.

Hydrogen could also be a factor for the smarter management of the inter-seasonal variation in energy demand by being used as a method of storing energy production (via electrolysis) when demand is low and playing it back into the system when demand is higher.

Mark concluded by saying that Hydrogen has a future because it is low cost to:

And it compliments electricity as an energy vector and addresses the inevitable intermittency issues for electricity generation (especially renewables).

Unsurprisingly such a comprehensive presentation ‘sparked’ much discussion in the Conversation itself and over drinks afterwards. As always achieving these re-purposing projects is never simple otherwise it would have been done already.

Notwithstanding that the logistics involved are challenging, Mark believed that the way is for the introduction of hydrogen to be made on a piecemeal basis, starting with projects in Local Authority areas where there is the desire and willingness to embrace the new model and only then move to a situation where local town grids where steadily joined together to form more far reaching hydrogen networks.

As always, this Fuellers Conversation provided a terrific opportunity to learn more details on a key subject from an obviously expert Speaker whilst also providing and opportunity to catch up and network with old friends and new contacts.