How to adapt to keep us flying whilst meeting future energy demands and environmental pressures.

The Fuellers Livery Company’s holds a regular series of conversations on energy topics. On the 26th February by John Pitts CEO, eJet, Global Aviation Fuelling Specialist Consultancy made a timely presentation on the supply of aviation fuel.

This regular series, hosted by EY Global Energy at their offices in Canary Wharf, benefited from the speaker’s vast experience of the supply of fuel to airports around the world, and he reminded us of the basic facts on aviation fuelling. The 4,000 commercial airports manage 100,000 flights per day and handle 210 Mm3 tonnes of fuel per year. The top 20 airports supply half of all aviation fuel, and the strictest protocols and regulations ensure that no contamination or water enters the supply, which could, in the worst case, lead to airborne incidents. 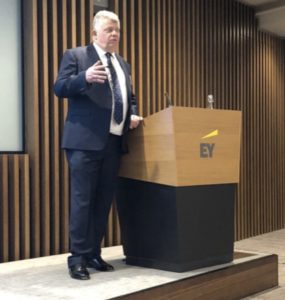 Fuel can amount to half the aircraft weight at take-off. Airports like London Heathrow hold 4-5 days’ supply on site, with a UK-wide network of pipelines, some up to 24” in diameter, to provide the fuel transportation from ports and local refineries. A well-organised consortium of fuel suppliers, airlines and airports ensure the stability of supply.

Aviation, as we learnt the following day with the High Court decision about Heathrow’s 3rd runway, is under pressure to reduce emissions, and John Pitt described some of the measures being taken.  Fuel made from domestic and commercial waste is at the forefront of developments, and already, the take-offs from Los Angeles Airport uses up to 25% of fuel from waste. Other routes to reducing emissions include battery power for small aircraft, hydrogen as a long-term possibility, and offsetting the emissions with the planting of trees.  The problem is the long, life cycles of engines and airframes, which will slow their commercial introduction.

The discussion, which followed, covered remarks about the lack of publicity and government support for the aviation industry case, the fact that aviation contributes a relatively small contribution, 2-3%, to world emissions, a discussion on the use of hydrogen as an aviation fuel, and reference to the improving aircraft efficiency by 20% in recent years. The wider use of ground towing equipment to replace the fuel for taxi-ing of aircraft is also being actively considered.

The conversation chairman, Paul Cuttill, OBE thanked the speaker, describing it as a Tour de Force, and EY for their excellent hosting of the conversation.