The Fuellers Company was shocked to hear the news in April that our shy and retiring (!) Master was in fact an alias for the renowned Wild West of Wimbledon outlaw, ‘Master of Moonshine’! Had you never wondered why our Master’s cup always overflowed during the many drinks receptions he attends? Well, the Sheriff and his posse finally tracked him down to The City where he faced charges of Crimes against his Liver among many other charges which included driving a non Euro 6 wagon in the City low emissions limits. 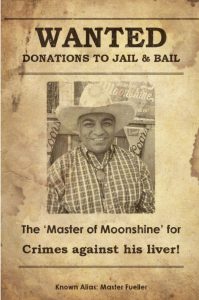 Meanwhile, the Master’s secret twin brother, Maestro del Boozio, had been building Moonshine distilleries and disguising them as legitimate watering holes and saloons. Moving his cargo about in covered wagons and oil tankers, he filled bottles of Moonshine from the tanker to avoid detection. Last seen organising a wagon train to their Cotswolds hide away under the guise of the Masters Weekend, he was sure to be apprehended shortly thereafter! 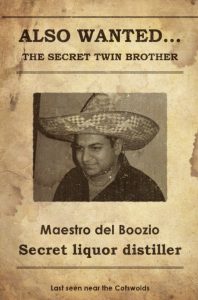 However, the Master of Moonshine had seen the light. The bounty placed on his head and the wanted posters may well have had something to do with it. The Sheriff and his posse brought him in and stood him before the Old Bailey under threat of being thrown into the Tower of London! He will then be given one last chance to mend his ways but only once a bail of £1000 came forth in aid of the Red Cross.

In an effort to reduce his time in the Tower, the renowned Wild West of Wimbledon outlaw ‘Master of Moonshine’ turned against his gang. Having tipped off The Sheriff, they were all tracked down… the dastardly Wombles of Wimbledon!

All bar one that is... Orinoco slept it off in the slammer, while Madame Chaulet, the true brains of the racket some say, became reformed and has now been put to work in the Livery Company kitchens. Tobomori was apprehended trying to ride his steed into the City, in breach of emissions (phew!). There was a dawn shoot-out between the Sheriff and Tomsk near the Guildhall yard but fear not, Tomsk recovered from a mere flesh wound in his cell. This cell he shared with Wellington who appeared to be a little too shy to disclose his powers of brewing. Not forgetting the excitable Bungo who was apprehended trying to get his hands on the plans for the Royal Year to try and get a selfie with himself and a very special guest! “What of Great Uncle Bulgaria?” the Fuellers demanded. Indeed, this old and wise Womble had outfoxed all efforts to track him down to date and could still be hiding amongst us, some say likely as a Past Master so do not, under any circumstances, let your guard down. It is rumoured that he brokered a gin sale in the Cotswolds with Maestro del Boozio and is now enjoying a very relaxing retirement!

With Maestro del Boozio still on the loose and our Masters reputation at stake, our junior warden rolled up her sleeves end launched a campaign to save our masters dignity, albeit not entirely! There was soon an update. What were the chances, the Masters own annual weekend was also being hosted in the Cotswolds? A dedicated band of Fuellers decided to head in that direction and search the local gin distillery for further evidence… 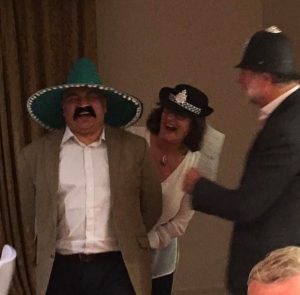 Maestro del Boozio was indeed apprehended in the Cotswolds, daring to pose as the Master while hosting dinner! The police arrived in the guise of Sergeant Peter Nelson and constable Chloe A’Jones who burst into the room bearing an arrest warrant for the Maestro and supporting evidence gathered that very day. A hasty whip around to add to the jail and bail proceed raised an extra £520 on the spot and secured the Masters release in time for him to get to the bar to recover from the experience. 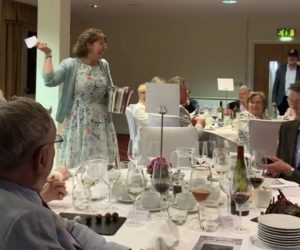 will still see his day on court and be held to account, and a similar sum will have been raised for our own charitable trust fund. The Junior warden will be putting in a character referencing and offering her thanks to the Master for being such a good sport and providing such a memorable finale to this campaign in the Cotswolds. Thank you also to those involved from donning costumes and creating an arrest warrant to passing the collection tin and not forgetting all our supportive members who continue to keep the true spirit of giving to the Charitable Trust Fund alive.

For anyone still left wondering why on earth we put everybody through this, let us explain…
Every year the right honourable the Lord Mayor and lady mayoress join forces with the British Red Cross to jail and bail livery masters in order to raise money for the charity. The master is taken to the Old Bailey where his fictional we hope crimes are put before the court were up on their taken to the tower and fed bread and water brackets him close brackets until someone to produce their bail. Before the actual date, 1st of July this year, the junior warden campaigns on the Master’s behalf to raise enough to cover the £1000 bail which always goes straight to the Red Cross. The extra good news is that anything raised over £1000 goes to the Futures Charitable Trust Fund (FCTF) so it is one of the 2 times a year we ask the membership to dig deep, the other being the masters own annual fundraising event which you can now find on the FCTF page of our website www.fuellers.co.uk.