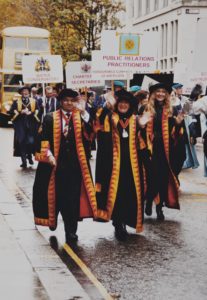 The Fuellers are very much part of the Civic City, and this was in evidence this weekend as the Master and Wardens participated in the Modern Companies' Float at the Lord Mayor's Show, celebrating the admission of the 690th Lord Mayor of the City of London, Alderman Charles Bowman.  Ably supported by banner carrier Liveryman David Marsh, we all had something of a work-out as we learned that being a) at the front of the procession and b) behind a wind & pipe band playing a pretty pacey march led to a trot around the Show route rather than the usual amble! 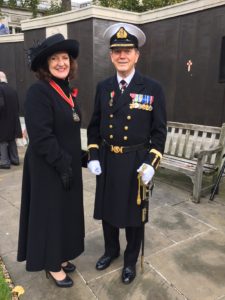 On Remembrance Sunday, the Master joined the Learned Clerk, an Elder brother of Trinity House, at the Merchant Navy War Memorial in Trinity Gardens, where she lay a wreath on behalf of the Company, recognising the ultimate sacrifice paid by some members of the Merchant Navy as they transported fuel for the Allied efforts throughout World Wars and other conflicts, indeed the Fuellers' affiliated Royal Fleet Auxiliary suffered casualties during the Falklands War.