Thanks to the generosity of Fellow Fuellers, the Master has been spared, and despite having her mug-shot taken at the Tower, she escaped and was able to attn the Fuellers' Thanksgiving Service and Affililates Lunch.  The Master would like to thank everyone for their contributions.

"In recent developments, it appears that our illustrious Master, Chloe, has been caught impersonating a police officer! Though bail has been set, Chloe will be jailed in the Tower of London on 6th July. If we want our Master to be at the Thanksgiving Service & Affiliates Lunch then you had better take action now, with out delay!" 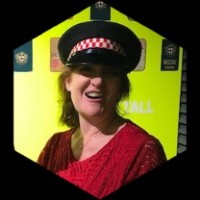 Jail and Bail is an annual fund raising event sponsored by the Lord Mayor. Masters are 'arrested' and taken to the Tower of London and not released until sufficient bail has been surrendered.  Fortunately thanks to your continued generosity, our Masters have always been released. The amount raised benefits both the British Red Cross and The Fuellers Charitable Trust Fund.  Go to the Charitable Trust page to donate to this worthy cause!