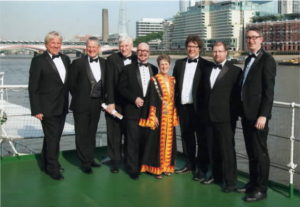 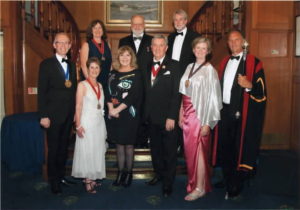 It was the hottest June day for over 40 years when the Master hosted the Fuellers Mid-Summer dinner attended by almost 100 people. The Fuellers and their Guests, all in their formal evening wear, coped very well with the heat to enjoy a memorable and fun evening on the River Thames.

The event was held in the historical and beautiful Livery Hall of The Worshipful Company of the Master Mariners. This is on the ship, HQS Wellington where the Livery Hall is located in what was the engine and boiler rooms. The ship was built in 1934 for the Royal Navy and designed to service the Commonwealth and Dependency nations, first operating around New Zealand. Having then served during World War 2 in the Atlantic as a convoy escort, it was sold off in 1947 and converted into its current role on the Thames.

The dinner was preceded by the installation of five new Freeman and the enrobing of two new Liverymen all of which attended the dinner. The new Freeman were Paul Boon, Dr Anthony Middleton, Charles Price, Alan Rance and Keith Williamson. The new Liverymen were Simon Fowler and Owain Johnson. Congratulations to all.

After a drinks reception on the sweltering Quarter deck, everyone then gathered in the comfortable air conditioned Livery Hall below for dinner. Following the procession of the Master and Guests into the Hall, an excellent meal was served with drinks followed by the speeches.

The first speaker was the Senior Warden and Master elect, Miss Chloë Andrews-Jones, who welcomed and led the toast to the guests. These included, from other livery Companies, Mrs Sally Bridgeland, Master Actuaries and Mr Chris Histed, Master Information Technologist. In addition she mentioned, Mr Tibor Z Gold MBE, a Trustee of Generating Genius. This is a charity that works with high-achieving students from disadvantaged communities, to win places in top universities.  She also introduced the Principal Guest, Miss Maggie Philbin OBE who is the CEO of Teen Tech, a charity helping students to understand the opportunities in the science, engineering and technology industries.

Maggie Philbin then spoke explaining all about the aspirations and substantial achievements of Teen Tech. She used her past TV and presentation skills to the full and captivated the gathering with an amusing and engaging speech. The Fuellers are looking forward to developing further the relationship with Teen Tech as well as Generating Genius. Maggie concluded her speech with a toast to the Company.

The closing speech was given the Master, Janet Harrison who thanked Maggie Philbin, the Guests and the many Fuellers for attending. The Master welcomed the newly installed members and also provided a summary of highlights from her year to date and mentioned a number of key events to come. She particularly thanked the Fuellers for providing sufficient donations so she could be released on Monday 19 June from the Lord Mayors annual Red Cross charity event, which is called ‘Jailed and Bailed’. This took place in The Old Bailey and in the Tower of London. The Master also mentioned her main charity fund raising event of the year is to come on 9 September, when she will be walking with her team some 25 kilometres across all the London bridges from Putney to Tower Bridge. She mentioned the information on how to donate will be issued shortly.

Overall the event was a big success, helping to raise the Company profile further and developing the fellowship within the Fuellers.