Each year The Charitable Trust, in its quest to support research and education, make awards to individuals from our Affiliations. On 22nd July 2019, in keeping with this long-established tradition, this year’s gathering began with a Thanksgiving service in the heart of the City, followed by a luncheon and prize-giving in the magnificent setting of Trinity House, one of London’s most elegant banqueting and conference venues. Of all the events held over the year, this one is always especially fulfilling. Mainly because our affiliates and scholars are present, making it possible to celebrate their growth and achievements in such a way that both sides benefit. 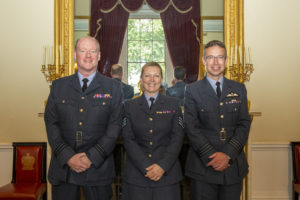 We welcomed our Affiliate prizewinners from HMS SULTAN the Royal Navy's engineering school, the Royal Fleet Auxiliary ships Wave Knight and Wave Ruler, 10 Squadron Royal Air Force who specialise in in-flight refuelling, 152 (North Irish) Regiment Royal Logistic Corps who provide fuel for land forces on deployed operations and Tactical Supply Wing RAF supporting rotary-wing operations worldwide. We also welcomed an outstanding student from Platanos Academy in Stockwell with whom we have close ties. All of whom are detailed below along with details of their recognition. 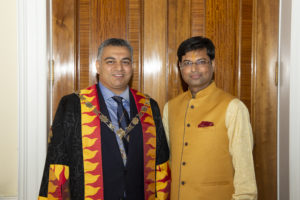 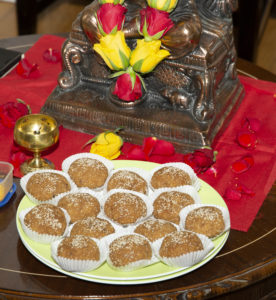 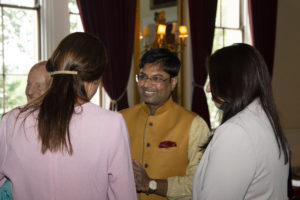 Following the Master’s own faith, the Affiliates Service this year was conducted by a Hindu Priest, at Trinity House. The Master gave a brief introduction to the order of Service and some words on the background to the Hindu traditions. Mr Gaurang Panditji then conducted a shortened version of the “Ganpati Pujan” in Sanskrit, which invited the Hindu God Ganesh to remove all obstacles and to bless the Fuellers Company, for the fruitful works they undertake. At the end of the service, he invited all the Fuellers assembled to recite a short Sanskrit shloka (A vedic hymn), which led onto a moment of silence to remember those Fuellers who had passed away in the last year.

Having concluded the service, there was time for a drinks reception before enjoying lunch in the beautiful dining room overlooking Trinity Green. Taking a pause in the proceedings, the Company welcomed Principal guest, Major General Angus Fay CB Head of Defence Logistic Transformation and Colonel of The Queen’s Own Gurkha Logistic Regiment, who reflected on his early career as an infantry officer in the Brigade of Ghurkhas. Resplendent in his uniform, he personally made the presentations to the winners which included a donation to a charity of their choice.

The Fuellers prize and medal winners for 2019 were announced as follows:

Fuellers Salver
Sergeant Sarah Monk
10 Squadron, Royal Air Force
Awarded for delivering transformational change while and bringing the Force to mustering standard in an incredibly short time. Additionally, when detached in exercise, for being instrumental in enabling deployment status through innate talent and hard-working ethic.

Fuellers Certificate
Major Karen Wallace RLC
Defence Strategic Fuels Authority, Royal Air Force
Awarded for outstanding efforts in the delivery of logistic support for the UK’s contribution to NATO’s EFP, planning and delivering a comprehensive solution to provide bulk fuel to a UK Battlegroup and working tirelessly to assess UK requirements and those of partner nations among other achievements.

Fuellers Certificate
Corporal Davy Averall
Tactical Support Wing, Royal Air Force
Awarded for his hard work and professionalism as a fuels operator and team leader, central to TSW activities over the last year and key in ensuring that fuel procured while on operation outside the UK was compliant with NATO requirements.

The Harrison Cup
Reuben Bowes
Platanos Academy – ‘Pupil of the year 2018-19’
A hardworking, polite and diligent pupil, Reuben’s passion for his education goes beyond the classroom. A fantastic ambassador for Platanos College, contributing articles to the school website and representing the school at external events. Most recently Reuben represented Platanos College at the Lambeth Phoenix Book Awards and was featured in the South London Press. His behaviour, attendance, and punctuality are impeccable, and he is a future leader at the school. 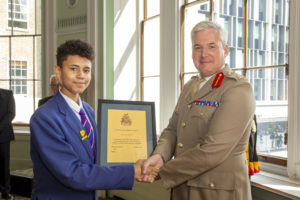 Follow this link to photographs of the Thanksgiving Service and Affiliates lunch and prizegiving.