The Livery assembles at Guildhall each Midsummer Day in the City of London to elect two Sheriffs. Although lingering lockdown regulations required the continued social distancing of single chairs for the Livery, we went forth in great colour through our robes and with a spring in our step having dusted off the cobwebs and found ourselves fully appreciating seeing each other in person! Although this year only one representative could be accommodated from each Company, this annual event is usually open to all Liverymen who qualify and it is heartily recommended to those who have not been before.

The office of the Sheriff is the oldest civic office in the City (older even than the office of the Lord Mayor itself) the jurisdiction of which is the square mile in the City of London. Normally, one of the Sheriffs is an alderman, who will hope to go on to become the Lord Mayor of London; and the other, sometimes referred to as the non-aldermanic sheriff, who has no further civic ambitions after completing his year at the Old Bailey. The role involves supporting judges at the Central Criminal Court, where the Sheriffs work and reside, and promoting the importance of the rule of law. The post also includes supporting the Lord Mayor in his or her civic duties and acting as an ambassador for the UK financial and professional services industry.

Alderman Alison Gowman is a name that you may well recognise as Honorary Liveryman of the Fuellers. Alison is spearheading the City Livery Climate Action Strategy with the aim of showcasing action within the Square Mile in the City of London Pavilion at COP26. Outside the Fuellers, Alderman Gowman has represented the Dowgate ward on the City Corporation’s Court of Common Council since 2002. She has practised as a solicitor in the City all her working life, specialising in commercial property at international law firm DLA Piper. She is a former Chairman of City Bridge Trust, and is a director of the Green Finance Institute, a sector she hopes to promote during her year of office. 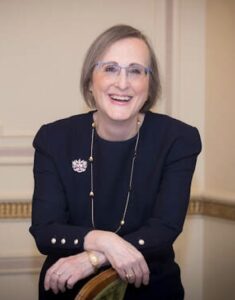 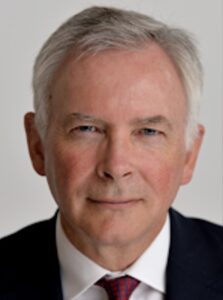 I am pleased to report that this year the Ceremony went without a hitch after we, the Livery, nearly voted twice by accident last year in the newfound Covid compliant confusion. During a smooth ceremony, and in a nod to Alison Gowman’s affiliated Livery Companies, the Fuellers were mentioned briefly in passing as the names of each Livery were woven into her acceptance speech. The Plaisterers had been left until last as it was a little tricky mentioning without inferring “being plastered on the job”! Nicholas Lyons provided a contrast, reflecting on the past year of trials for all those in the City, and the collective support of the Livery moving forwards.

After the event, I joined Master of Chartered Accountants at his kind invitation for us to dine in the Guildhall Dining room. It was such a lovely atmosphere to be together, able to remove our masks and actually see other properly for the first time that day. Despite a full fire alarm evacuation of Guildhall then ensuing, we were soon back at our seats and making new acquaintances with fellow Masters and Wardens with many a tail of lockdown Company meetings plus the beginnings of meetings in person. We were also joined by the current Sheriffs, Alderman Professor Michael Mainelli and Mr Christopher Hayward CC who continue to hold office until Michaelmas Eve in September.

The day concluded shortly after Aldermen Alison and Nicholas came to see us during lunch to thank us for our support and to share a few words about the year ahead. They were well received and shown the support of the Livery present.

If you are a Liveryman and have not yet attended Elections for either the Sheriffs or the Lord Mayor at the Guildhall, London, I thoroughly recommend it. It may be daunting as invitations are extended to Liverymen only, but it really is a wonderful opportunity to become more engaged with the City and its Traditions, and meet a few more of your fellow Liverymen. There is usually, subject to pandemic restrictions, a small group of Fuellers in attendance. So, I encourage you to come join us, catch up with familiar faces and exercise your right to vote at the next elections. Keep an eye out for calling notices nearer the time.

NB: text from the Livery Committee quoted within.