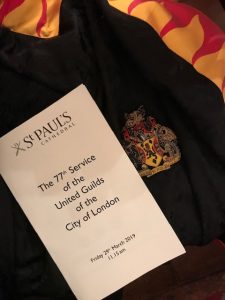 In a colourful display of Company gowns and finery, Livery Companies and other members of the City came together at St Pauls Cathedral for The 77th Service of the United Guilds of the City of London. We were joined by The Right Honourable The Lord Mayor and his dignitaries including The Sheriffs and Ward Beadles, each Beadle dressed in their robes, tri-corn hat and carrying the ward mace. The Bishop of London and assembled clergy also looked bright and colourful as they processed, gold threads glinting in the sun which streamed down from the windows above. As the fanfare filled the Cathedral, it was really quite a special moment.

Being 110 Livery Companies in total, there are too many to process at once and so only the Masters of 12 other Companies are invited in turn each year to follow the ‘Big Twelve’ with the remainder already seated. This year was the turn of our Company with Shravan processing down the aisle. Resplendent along with Junior and Senior Wardens in our bright ‘flaming’ gowns, we drew many an admiring compliment! We were also joined by several other Past Masters and Company members and all sang in strong voice!

In relation to the pomp and Ceremony of the City, the origins of the UGS are more recent than you might think. The order of service explains...

“At a meeting of the Masters and Prime Wardens of the Twelve Great Companies, held at Goldsmiths’ Hall, on 1st February 1943, it was decided to hold a service in St Paul’s Cathedral for the Livery Companies and Guilds of the City of London. The idea behind the service was to help lift the spirits of the City following the Blitz during WWII. Having regards to the religious origins of the Companies, Thursday 25th March 1943, Lady Day, was selected as the date for the Service, being the first year according to the Julian Calendar. The Right Honourable The Lord Mayor of London, Sir Samuel Joseph, attended along with the Sheriffs and Court of Aldermen and the Right Reverend The Lord Bishop of London, Dr G.F. Fisher, preached the sermon. As far as records show, this was the first occasion on which all the Livery Companies and Guilds of the City combined to hold a religious service. Since then, it has become an annual event and remains one of the few occasions in the calendar at which the Livery Companies and Guilds of the City can gather together as a whole.”

After the service we all spilled out like a rainbow onto the main steps of St.Paul's with many a passing tourist pausing at the sight. Then onto lunch as guests of The Worshipful Company of Pewterers. After a delightful lunch, Master Pewterer gave us some fascinating insight as to their origins, their Royal Charters, some of their Treasures and the piece which drew the biggest gasp, a flag which has survived from 1662, not destroyed during the Great Fire of London as it was flying on a barge on the river at the time. That barge was conveying Catherine of Braganza, the future wife of Charles II.

After enjoying such wonderful hospitality, all too soon it was time to leave. A very interesting day in the City, leaving one very proud to be a Liveryman.