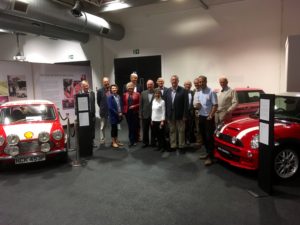 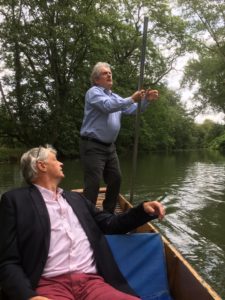 An exclusive guided tour was enjoyed by a Group of fourteen Fuellers led by the Master, Janet Harrison, around the BMW MINI Plant in Cowley, Oxford. This was followed by an excellent lunch at the award winning river side Cherwell Boathouse Restaurant in Oxford, and a Punt on the river for the brave few. A great and unusual day out for all.

An early start was needed to gather at the MINI Visitor Centre and Museum, Cowley, Oxford for one of the first plant tours of the day. An introduction to the site was given by our guide along with a short film explaining the history of the site and the MINI. The Cowley site has been manufacturing automobiles for over 100 years and used to be a byword for the inefficiency of the UK motor industry. But today it is now the most cutting edge modern and advanced car production plant in the UK. BMW acquired the site in 1994 and have since 2001 spent more than £1.75 billion on the site, which now has state of the art paint shops, body shops and final assembly facilities. All these utilise the latest robotic, computer and digital technology in a bright airy structure. No more dark, polluted and oily factories of old.

We toured the Plant including both the body shop and final assembly facilities. No access to the paint shops was allowed in order to maintain an appropriately sterile environment. We observed many of the 4,000 staff and 1,000 robots at work in a clean and very well organised Plant. To satisfy demand the Plant currently operates almost 24/7 on three shifts per day with a short daily break between 4.30am and 6am for maintenance.

The body assembly facility creates the body shell using the pressed steel body parts brought in from BMW in Swindon. This shop seems to be almost 100% robots all hard at work with startling speed and dexterity in a robotic ballet with hardly a human on site! Each car shell requires between 4,000 and 6,000 spot wells all delivered by the robots.  The final assembly facility is huge and brings together all the parts and components, 40% of which come from the UK including engines from BMW Hams Hall. This complex assembly process is controlled using bar code and digital technology done by staff assisted by robots. In addition some components are moved around the Plant by un-manned automated guided vehicles which we had to avoid as we walked. Perhaps these are the future of what we will have on our own road networks soon?

The Plant has produced more than 3 million cars since the MINI started in 2001 and makes up to 1,000 vehicles a day, each one being made to the customer’s specific order with multiple variations meaning no two MINI’s are the same. The cars are sold in more than 110 countries worldwide and the new vehicles are moved around the UK by the Plants own trains, saving 1.4 million lorry miles per year.

The site is a massive consumer of energy,  but seeks to be as efficient as possible including the latest ovens in the paint shops and ventilation techniques. All emissions from the paint shops are collected and burnt in a catalytic convertor. The site also has over 11,550 solar panels covering an area the size of five football pitches. All of which helps result in well over 10% reduction in emissions on the site.

The Cowley’s Plant future is assured following the recent announcement that BMW’s new all electric MINI will be built there from 2019.

As the sun came out, the party moved on a short distance towards the centre of Oxford for a drinks reception and lunch at the nearby riverside Cherwell Boathouse restaurant. The meal was excellent and afterwards the brave few hired a Punt on the river Cherwell, powered by the two Fuellers present who are experienced in such matters, Matthew Gordon and David Rose. No one took an unscheduled dip!

Overall a very enjoyable and fascinating day, with special thanks to Immediate Past Master, John Ingham, who expertly organised the event.