On a mild, wintry day 20 Fuellers along with a similar number from the Carmen and other Livery Companies spent a day on board RFA Tiderace, at the invitation of the Royal Fleet Auxiliary, in H M Naval Base Portsmouth.

RFA Tiderace is the newest ship in the fleet, 200 metres long, and capable of carrying 38,000 tons of fuel, either aviation, or diesel or both.  It is the second in a fleet of four 39,000 tonne Tide-Class tankers, capable of carrying up to 19,000 cubic metres of fuel and 1,400 cubic metres of fresh water.  She is fitted with self-defence sensors and close in weapons and is fitted with a hangar and workshops to operate two or three Merlin helicopters.  She has 65 crew, runs on diesel/electric, and can sail for 8000 miles before needing to replenish stocks.  Tiderace will be working alongside the new carrier HMS Queen Elizabeth, which is still on sea trials, and needs supplies every three days.

After a welcome on board, and coffee, Commodore Duncan Lamb and his senior staff treated the Livery Companies to wide ranging presentations on the growing and changing role of the RFA in logistics support of Royal Navy Operations, in all the oceans of the world. A key activity has been disaster support and narcotics work in the Caribbean and supplying task forces like those for the new carrier fleet.

The RFA has thirteen ships in all, employing 2000 people, with the majority (94) at sea.  We learned that recruitment and retention of staff is a major problem for the Navy, particularly engineers and technicians.

After lunch we had a tour of the ship, and were shown medical, fire-fighting, operations rooms for refuelling and control and finally the highly sophisticated bridge.  It was a very interesting and rewarding day, which was thoroughly enjoyed by all.

Our grateful thanks to the Commodore and his team for an enjoyable and highly informative day. which was thoroughly enjoyed by all. 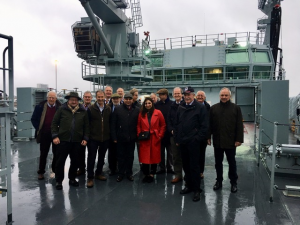